The nature of any belief is that once you adopt it you will tend to defend it and seek evidence to hold it to be true. If you believe you cannot, then you will make sure that you don’t succeed. You will find plenty of evidence to keep the belief alive.

I was recently on holiday in Thailand were a group of friends hired a long tail boat to try rock climbing over the sea. As I approached the high rock, jutting out of the sea as I saw a rock climber hurrdle himself off the rocks after what seemed like 10 mins of deliberation.

I was nervous for him due to the height of the fall but also because of the deep sea that lay underneath. I am the type of swimmer that likes to be able to put their feet on the ground quickly while swimming if needed. I didn’t trust my swimming ability to make it from the boat to the rock face, never mind hurrdle myself from a cliff. As our boat settled I watched all the men jump jofully from the boat and climb up a flapping ladder to get to the first run of the climb. I watched as they tried to contort their bodies into shapes while balancing on the  cliff face. Only one member of the group was unable to pull himslef up the ladder. As I watched him fumble and fall off the ladder I instantly thought that will be me, I won’t get up that ladder, it’s too hard. I put my life jacket on and swam over to the rock all the while thinking I am not going to make it up. I am going to make a fool out of myself.

I started the climb and was surpised I made some head way. Just nearing the top I lost my footing with one step and decided again no I cannot do this I am going to jump back down. And I did to my regret. I could of made it up that ladder, if only I had let myself! 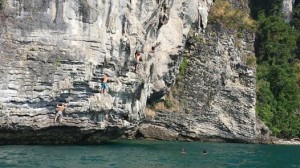 What beliefs are you holding onto that are holding you back. What do you need to concentrate on to help push you forward?

We use cookies on our website to give you the most relevant experience by remembering your preferences and repeat visits. By clicking “Accept”, you consent to the use of ALL the cookies.
ACCEPTCookie settingsRead More
Manage consent

This website uses cookies to improve your experience while you navigate through the website. Out of these, the cookies that are categorized as necessary are stored on your browser as they are essential for the working of basic functionalities of the website. We also use third-party cookies that help us analyze and understand how you use this website. These cookies will be stored in your browser only with your consent. You also have the option to opt-out of these cookies. But opting out of some of these cookies may affect your browsing experience.
Necessary Always Enabled
Necessary cookies are absolutely essential for the website to function properly. These cookies ensure basic functionalities and security features of the website, anonymously.
Functional
Functional cookies help to perform certain functionalities like sharing the content of the website on social media platforms, collect feedbacks, and other third-party features.
Performance
Performance cookies are used to understand and analyze the key performance indexes of the website which helps in delivering a better user experience for the visitors.
Analytics
Analytical cookies are used to understand how visitors interact with the website. These cookies help provide information on metrics the number of visitors, bounce rate, traffic source, etc.
Advertisement
Advertisement cookies are used to provide visitors with relevant ads and marketing campaigns. These cookies track visitors across websites and collect information to provide customized ads.
Others
Other uncategorized cookies are those that are being analyzed and have not been classified into a category as yet.
SAVE & ACCEPT
Powered by